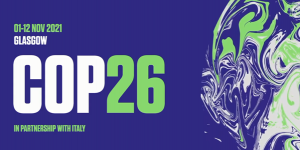 What is COP26 and why is it important?

The Conference of the Parties (COP) is a yearly global climate conference that is attended by all the countries that signed the United Nations Framework Convention on Climate Change in 1994. The COP events allow all countries to gather and discuss policy changes regarding reducing global greenhouse gas (GHG) emissions and reaching the ambitious Paris Agreement. The Paris Agreement, signed in 2015 at COP21 in Paris, aims to limit the global temperature increase to 1.5C above pre-industrial levels in an ideal situation, or below a 2C increase in a worst-case scenario.

Five years on from the signing of the Paris Agreement, COP26 was planned to take place in Glasgow’s SECC between the 9-19th of November 2020. Glasgow is the ideal location for hosting COP26, after being in the top 4 of the Global Destination Sustainability Index and working towards Scotland’s wider 2045 net-zero target. The city has also previously succeeded with multiple global events, including the 2014 Commonwealth Games and the 2015 World Artistic Gymnastics Championships. As OnGen are a Scottish based company, we are thrilled to have COP26 being hosted at our doorstep.

The Nationally Determined Contributions (NDC) is an action plan for becoming aligned with the Paris Agreement and is required by each country that signed the agreement in 2015. The NDCs for each country were to be updated in the run-up to COP26. Therefore, COP26 is expected to be an important event for highlighting countries’ progress in making plans to reduce emissions within the past five years.

However, owing to the global impacts of the COVID-19 pandemic, COP26 has been postponed to the 1-12th of November 2021. The coronavirus pandemic has also resulted in climate change being abruptly dropped from the centre of attention as the world continues to fight the pandemic.

How will the postponement of COP26 impact global aims of keeping in-line with the Paris Agreement?

Have we lost a year of progress in the climate battle because of the COP26 event postponement and focus shifting from global warming to COVID-19? Many environmental activists, including Sir David Attenborough, are concerned that the postponement of COP26 will slow movement in reaching environmental targets. After all, if many of the green policies working towards the Paris Agreement aim to be implemented globally by 2050, then one year lost could lessen our chances of meeting green targets in-line with this climate agreement.

Have any positive green changes come out of the past year?

The delay to COP26 and the global outbreak of COVID-19 may have slowed progress in creating new green policies and making further progress in meeting previous climate commitments. However, progress in fighting climate change has still been noted within the UK and worldwide during 2020.

Escalated policy change has also taken place in the public and private sectors within the UK and globally. These goals should align with COP26’s aims for a greener future. In the UK, the government have decided to begin implementing more positive green changes by wanting to ‘build back better’ after the COVID-19 pandemic. The UK government aim to work towards an eco-friendlier future while rebuilding the economy with a Green Recovery.

The UK’s Green Recovery in preparation for COP26

The UK government announced funding earlier in the year to help accelerate a Green Recovery to rebuild the economy and work towards net-zero by 2050. UK funding includes the retrofit Green Home Grant and the Public Sector Decarbonisation Scheme, which could create over 130,000 jobs. These funds are a great way to gain financial support for investing in onsite renewables or property retrofit, which help save money while lowering emissions.

Ambitious offshore wind targets have also been announced as part of the 10-point plan released by Boris Johnston as a component of the UK’s NDCs. The UK’s NDCs highlight how the government will meet net-zero by 2050 and be aligned with the Paris Agreement. The offshore wind capacity in the UK is aimed to increase by 10 GW by 2030, which is supported by £160 million of government funding. The UK’s 10-point plan that was recently released also includes an increase in carbon capture storage funding and moving forward the ban on petrol and diesel cars to 2030. Before the effects of COVID-19 had hit the UK, the government also changed the policy of the Contract for Difference (CfD) auction to also include onshore wind, which will help increase capacity; RenewableUK forecast that the UK’s total onshore wind capacity has the potential to reach 30 GW by 2030.

These funding initiatives and plans are a good start in the path to a Green Recovery and will help meet the UK’s net-zero target, in line with the Paris Agreement. However, a Green Recovery would be capable of achieving a lot more with additional governmental support, such as extra government funding for onsite solar and wind installations, along with industry bailouts tied to carbon reduction targets for industries such as aviation that currently emit a high volume of GHG. Furthermore, MPs, climate activists and large business groups are calling for the UK to be ambitious global leaders in preparation for COP26 by setting earlier climate targets for 2030. The UK has also been criticised for their funding for a Green Recovery being far lower than countries such as Germany, with a £12bn funding package in the UK compared to €40bn in Germany. Carbon Tracker analysts also predict that the UK government’s 10-point plan will not meet the carbon reduction targets set by the country. It is hoped that the UK government will announce more funding and plans to meet climate targets as we approach COP26 and step-up to continue being a leader in the climate battle.

Globally, have other counties used 2020 to make progress in aligning with the Paris Agreement?

This year has seen climate targets being made in high-emitter countries, including China, South Korea and Japan, which all have announced net-zero or carbon-neutral goals. South Korea and Japan plan to be net-zero by 2050, while China is aiming to be carbon neutral by 2060. The European Union also aim to increase their reduction of emissions to 55% below 1990 levels by 2030. These targets are a step in the right direction for reducing GHG emissions, with the Guardian reporting that 40% of global GHG emissions are emitted between China, South Korea, Japan and Europe. Therefore, if these countries stick to their targets, we should expect to see a large decrease in GHG emissions by the mid-century.

However, a recent Climate Transparency 2020 report on G20 countries using results from Climate Transparency’s Climate Action Tracker calculations highlighted that none of the G20 countries, which include the highest GHG emitting countries (China, USA, Russia, European Union etc), will have sufficient action in place by 2030 to align with 1.5C warming if they follow their current plans mentioned in their most recent NDCs.  Furthermore, India is the only country with strong enough policies to even meet the outcome of 2C warming.  As we get closer to COP26, it is hoped that more countries will announce net-zero targets and update their NDCs, such as the United States, after electing Joe Biden, which would help further reduce global GHG emissions. However, globally, countries need to be more ambitious in the run-up to COP26 to stop the extent of global warming that is currently predicted if we continue with current targets.

What about green business change during 2020?

Positive change has been seen in the private sector this year as many companies aim to be more aware of the impact their business has on the environment and to align themselves with the Paris Agreement. Businesses have opened their eyes to the GHG emissions that their organisation emits and have pushed to set a net-zero goal. According to a report by the NewClimate Institute and Data-Driven Environ Lab, the number of global net-zero pledges has more than doubled within the last year, with over 1,500 companies announcing a net-zero target. These organisations are planning to reduce their GHG emissions by taking a variety of measures, such as becoming more energy-efficient or installing onsite renewables. Companies encompass sectors including retail (John Lewis) and manufacturing (Rolls-Royce), with targets ranging from 2030 to 2050. It is expected that this trend will continue in 2021, with many organisations announcing climate targets across the world and beginning to reduce emissions. More organisations still need to take the initiative to be in-line with the Paris Agreement and make appropriate changes.

The first set of business sponsors for COP26 have been announced to include SSE, Scottish Power, National Grid and NatWest Group, of which OnGen is part of the Climate Change Accelerator programme. These businesses are all aiming to meet ambitious net-zero targets. It is hoped that these businesses will inspire other organisations to set a net-zero target before COP26.

Renewables have been used as an effective measure for organisations to reduce GHG emissions. Tesco is one of the latest businesses to highlight the benefits of renewables after announcing plans to install multiple ground-mounted solar farms and onsite roof-mounted solar to help Tesco reach their 2035 UK net-zero goal. Renewable installations are known to be vital for meeting climate targets.

How Do Renewables Align with The Paris Agreement?

An increase in the volume of renewable energy is key to reaching net-zero targets and aligning with the Paris Agreement. Our free energy feedstock from the sun and wind make renewable energy the greenest energy source globally and such renewables are expected to become cheaper than fossil fuels as advances in technology continue. The volume of renewable installations must greatly accelerate to align with the Paris Agreement, with IEA estimating that by 2030, 500 GW of solar power must be installed each year globally, among other types of renewables. Atkins reported that the UK will need to install 20 GW of onshore wind, 80 GW of solar and 15-30 GW of energy storage, among a vast increase in other technologies including offshore wind and nuclear power, as part of the planned energy shift for the UK to meet net-zero.

There is a lot of work needed for the world to align itself with the Paris Agreement. It is hoped that we will see stronger, more ambitious climate targets in 2021 that will further action taken to reduce GHG emissions as we get closer to COP26. Our hard work should pay off within the next generation if we can help limit global warming and protect our planet.