In the past few years, there have been several power outages worldwide, disrupting business operations and raising a discussion about the reliability and resilience of grid-supplied energy. In the UK, many take energy for granted, failing to consider how an increase or decrease in normal demand may influence supply.

As demand continues to rise and the electricity network continues to decay, the risk of energy blackouts greatly increases. The much-needed shift towards more renewable energy sources can, unfortunately, pose a threat to grid supply due to the intermittent nature of generation, causing greater variability and uncertainty. Additionally, the ever-looming threat of climate change increasing the frequency and intensity of storms, floods and fires has further potential to disrupt energy supply.

Looking back to recent power outage events, it is important to consider lessons learned and plan towards a future where everyone can depend on a secure energy supply.

The power cut observed in the United Kingdom on the 9th of August 2019 points to the unreliability of the grid during periods of strain. The loss of power was caused by a series of generation failures in offshore wind generation (loss of 812MW from Hornsea Wind Farm) and gas turbine capacity (loss of 727MW at Little Barford), both of which failed at the same time. This has been said to have happened due to a lightning strike, but, as lightning strikes are a frequent occurrence, there may have been other factors at play.

The significant drop in generation represented roughly 4% of the UK’s demand at that time, dropping the grid frequency below the lower acceptable limit of 49.5Hz. A drop in frequency indicates that there is not enough supply to meet demand. Therefore, some electricity demand was automatically disconnected to prevent the frequency from dropping further, which could have caused a blackout across the entire grid. Frequency response services kicked in, but further losses of generation resulted in more automatic disconnection of demand. 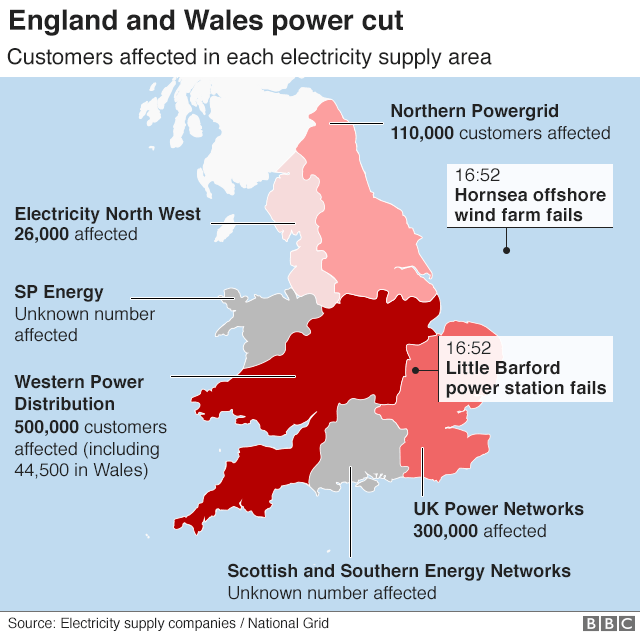 The blackout caused around 500,000 customers in Wales, south-west England and the Midlands to be affected, as well as 300,000 in south-east England, 110,000 in Yorkshire and north-east England and 26,000 in north-west England to be without energy. Within 15 minutes, DNOs were able to begin restoring demand, with all users being reconnected within 45 minutes. However, transport infrastructure being disconnected created severe disruption, with engineers required to manually reset trains, causing the cancellation of many services. This power outage also resulted in the suspension of hospital procedures and significant financial losses for businesses.

The main question that arises is if this blackout could have been prevented. Along with the lightning strike, the Drax power station in Yorkshire was not supplying energy at full capacity and a large proportion of demand was being met by wind. Wind presents a few challenges to system stability, as wind is an intermittent, variable source and has the potential to cause grid frequency changes. However, wind has been contributing an increasing amount to the grid for some time without incident and is likely not the main contributing factor.

Some say this event is a major failure by the National Grid, with a finger pointed to the poor planning of which users would be shut off. However, it is extremely unlikely for several large generators to go offline at the same time, begging the question of if it would pay off financially to have enough energy storage for such rare events. Considering the ageing network, as well as the potential for renewable generation to be curtailed even during a supply shortfall, energy storage and an improved network will be needed if we are going to continue relying on the grid.

The Texas power outage left millions of Americans without power for several days, caused mainly by an extreme weather event preventing the grid from meeting increased energy demands. A severe winter storm brought the coldest weather to Texas since 1989, triggering residents to increase their energy demands to a record winter high to heat their businesses and homes; the system operator, Electric Reliability Council of Texas (ERCOT), had expected 57.7GW of demand, with an extreme peak demand prediction of 67.2GW. However, the actual demand during this event was 75.1GW.

Owing to the weather, energy providers were struggling to cope with frozen wind turbines and blocked pipes. However, contrary to what several politicians have alluded to, wind turbines were not the main providers at fault. Instead, the main provider failing to keep up with demand was natural gas; frozen plants and equipment, as well as more capacity under maintenance than planned, caused gas generation to decline rapidly.

As the grid could not meet demand, generators tried to make up for it. However, demand was too high for them to cope, causing the generators to be overloaded and go offline. Ultimately, this could have instigated a state-wide blackout potentially lasting several months. To prevent this, ERCOT issued rolling blackouts to different areas to keep demand under capacity, shedding nearly 30GW of demand to keep the grid stable. This decision should have prevented any long-term blackouts, but instead, many were left without power for many days.

The longer-term blackouts can be attributed to several reasons. Firstly, people live in places where electricity generation equipment was damaged by the weather and therefore power could not be supplied even when demand was not shed. Furthermore, some residents lived in areas where equipment that had been taken offline needed to be put back on manually, slowing down the restoration process. Finally, many receive power from large industrial facilities that may have voluntarily gone offline, with no urgency to come online until the grid was fully stable. The areas affected disproportionally impacted poor families and people of colour, whereas many affluent areas kept power, as they were close to critical infrastructure that was exempt from the rolling blackouts. If you would like to read more about how race and energy are linked, read our other blog post here.

Why didn’t Texas buy power from other states to keep up with rising demand? This seems like the easiest solution; however, Texas has a separate grid that allows them to avoid regulations on trading energy across states. However, the lack of regulation contributed to the ill-maintained grid which left Texas largely in the dark.

The Texas power outage is a clear example of the unpredictability of extreme weather events and the impact on the grid caused by changes in energy demand. Here, the lack of energy storage, as well as the inability to trade with other energy networks left Texas in the dark.  The failure of the grid to cope with sharp changes in demand reinforces the need to reform the way energy is generated and distributed.

These two blackout events represent only a sample of the various shortages seen across the world. From the extreme 2012 heatwave impacting the power supply of more than half of India’s residents to a faulty circuit causing nearly 50 million people across Argentina, Paraguay and Uruguay to be without power in June 2019, these events are not uncommon.

In the United States, more extreme weather events will continue to cause changes in electricity demand. Indeed, the Department of Energy found that weather-related power outages are up by 67% since 2000, with hotter heatwaves, more bitter winter storms and more ferocious hurricanes due to increase further.

Decaying grid infrastructure exacerbates the issues caused by climate change. In California, the warming climate has increased the likelihood of power lines catching fire, which, combined with ageing transmission lines, caused a wildfire that took the lives of 85 people and destroyed 19,000 buildings in 2018. The grid manager issued rolling blackouts, causing life-threatening situations for people dependant on refrigerated medication. In the UK, National Grid has warned of an increased risk of power blackouts due to the outdated and ageing electricity network. Ofgem’s planned investment cuts in energy networks leave this issue unresolved.

Costs to businesses from power shortages vary according to the size and business sector. Direct costs can be attributed to a loss in production, idle facilities, as well as damage to products and equipment. Taking Google as an example, a power loss in 2013 is estimated to have caused losses of £100,000 per minute.

The key question that remains is how these power outages can be prevented. Some argue that reliance on renewable energy sources is the main component to these shortages. However, the issue is often that there is not enough investment in energy storage like batteries to store renewable power for times of peak use. Extreme weather events make it hard for grid managers to calculate demand, further creating a need for increased storage capacity.

There is a growing push towards decentralised power systems to provide a more resilient supply. Communities and businesses can generate and store their own renewable energy, and, if disaster strikes, power can be shared between the smaller systems. This type of microgrid solution minimises the risk of power outages, allowing business to still run with their locally-sourced energy. Instead of being at the mercy of the grid, onsite renewable generation and storage can provide a safe and secure energy supply.

Onsite renewables reduce reliance on the grid. Producing your own energy onsite also removes the dependence on the transmission and distribution network. Although many renewable technologies give intermittent supply, pairing them with a battery can provide a secure source, allowing you to reserve power for times of peak demand.

OnGen has created the OnGen Expert, a software solution that provides automated desktop renewable energy feasibility assessments. By taking in a business’s energy consumption and tariff data, as well as site-specific geographic considerations, the OnGen Expert finds the right renewable energy and storage mix to help your site maximise both carbon and cost savings. If you want to protect your business from energy shortages and reduce your reliance on the grid, contact OnGen today to begin your journey.