This work was supported by a NERC Doctoral Training Partnership grant (NE/S007407/1).

Solar photovoltaic (PV) deployment has increased at an exponential growth rate in the last two decades, accounting for 3.1% of global electricity generation in 2019. This can be attributed to falling costs due to improvements in technology and the production process and favourable policy schemes. To assess the financial costs as well as the sustainability of solar PV, this report analyses the Levelised Costs of Energy associated with solar PV systems and considers Life Cycle Assessment to account for greenhouse gas emissions during the systems’ lifespans.

Levelised Cost of Energy, LCOE, the total lifecycle cost of a facility compared to the amount of expected produced energy, can be used to compare different energy generation technologies. Solar LV LCOE have been decreasing in the last two decades, and are, on the low end, comparable with baseload technologies such as coal and gas fired CCGT.

To assess a project’s overall climate impact, it is crucial to consider impacts of raw material extraction, manufacturing, transport, as well as decommissioning and associated waste. For solar PV, more than 70% of greenhouse gas emissions are found to occur upstream in the production and manufacturing process.

Solar PV systems’ carbon footprint is approximately 10 to 53 times lower than emissions reported from burning of oil and roughly 6 to 40 times lower than the emissions found to be occurring during the burning of natural gas. Greenhouse gas emissions depend, for example, on the fossil-fuel intensity of the electricity provided during the Solar PV production process. Hence, to provide clarity on emissions during production and to facilitate informed, sustainable decision making for the consumer, it is necessary that solar PV producers produce data on energy intensity and the amount of greenhouse gas emitted during production.

Power generation from solar photovoltaic (PV) has increased exponentially in the last two decades, reaching an global electricity generation of 156 TWh in 2020, representing 3.1% of global electricity generation in 2020 (IEA 2021). Particularly the last decade observed a huge increase in solar PV capacity. Nonetheless, solar PV has even more enormous potential as there is immense amounts of solar energy available for conversion into electricity. This energy is in addition is efficiently exploitable, infinite, and predictable (Tawalbeh et al., 2021). 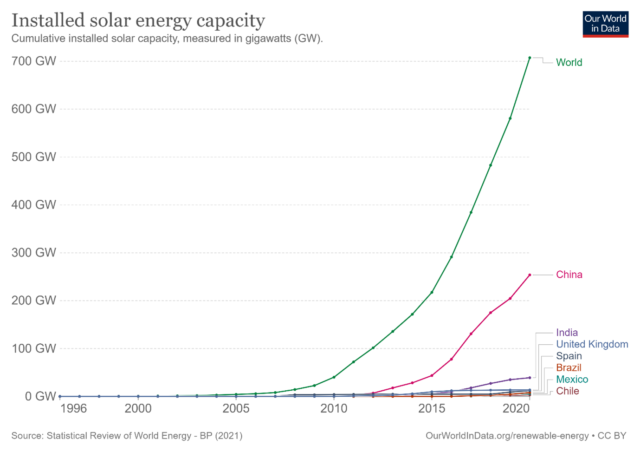 PV systems are regarded as clean and sustainable sources of electricity, and hence important for mitigating climate change and removing the reliance on fossil fuel consumption for energy production (Dale and Benson 2013). In the context of climate change, it is crucial to understand whether a technology either contributes or mitigates global warming. This can be assessed by considering not only the direct financial cost of the project, but also its indirect, environmental, and societal cost.

To assess the financial and environmental costs of Solar PV, this report considers two cost analysis methods, Levelised Cost of Energy and Life Cycle Analysis. Arguing that one should consider the environmental impacts occurring during the production and manufacturing phase of solar PV when assessing the technology’s sustainability, we find that whilst solar PV is not a zero-carbon solution, it can be considered a low-carbon, cost-effective technology.

The levelised cost of energy (LCOE) informs about the unit energy cost over the whole life of a project. It is formally defined as the total, discounted lifecycle cost of a facility compared to the amount of energy it is expected to produce. For this, one adds up the lifetime costs of the energy system and divides this by the system’s entire energy production. Hence the LCOE is expressed in $/ MWh or £/MWh (Aldersey-Williams and Rubert 2019).

LCEO covers plant-level costs: the capital, operating and financing costs associated with the system. Whilst it does cover the cost of carbon emissions generated during the system’s lifetime (OECD/ IEA 2015), it does not explicitly capture other externalities, such as emissions generated during the material processing process to produce the required parts before installing the plant (BEIS 2020), as shown in Table 1.

Lazard’s most recent LCOE analysis found that solar PV plants have progressively become cost-competitive with conventional energy generation technologies (Lazard 2020). Similarly, the IEA’s 2015 Projected Cost of Generating Electricity report found that compared to baseload technologies, such as coal and nuclear, Solar PV can generate electricity at similar price levels, provided the plant’s local circumstances facilitate solar power exploitation (OECD/ IEA 2015). Lazard’s report further highlighted that due to improvements in technology, learning, larger competition and decreased capital costs, a huge decrease in costs of utility-scale renewable energy plants has been observed. In the case of solar PV, within the last decade, the price of solar PV has dropped by a factor of 10 (Tawalbeh, Al-Othman et al. 2021). Consistent with these decreasing costs, research from the Department for Business, Energy and Industrial Strategy (BEIS) indicates that for energy plant projects commissioned in the next twenty years, large-scale solar PV plants are predicted to become the cheapest technology in terms of LCOE (see Figure 2). 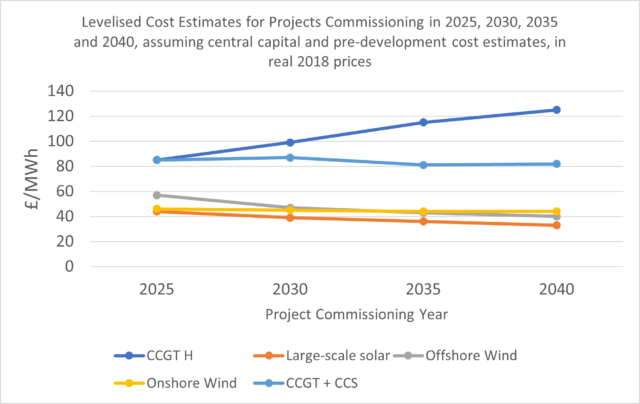 Figure 2: Levelised Cost Estimates for Projects Commissioning in 2025, 2030, 2035 and 2040. Large-scale solar is forecasted to become the cheapest technology outlined within the report. Source: BEIS (2020).

Therefore, from a financial perspective, solar PV is cost-effective, and competitive with other conventional electricity generating technologies (Brooks 2014), which can be facilitated further with a supportive renewable energy policy environment (Jäger-Waldau, Kougias et al. 2020). However, due to the intermittent generation nature of solar PV, solar power requires additional electricity storage or back-up technologies in order for society to benefit from a constant, reliable electricity supply (Louwen, van Sark et al. 2016).

During the operation of PV systems, the systems result in minimal pollution. However, negative environmental effects of PV systems can be observed particularly during the systems’ life cycle, i.e., during manufacturing process, as well as disposal. Environmental impacts range from the contamination due to hazardous material, water resources pollution, and greenhouse gas emissions to the impact of PV installations on land use (Tawalbeh et al., 2021).

Estimating the costs of energy production requires to not only think about traditional, financial costs, but also to think about external, environmental costs  (Corona, Cerrajero et al. 2016). Figure 3 shows a life cycle diagram, displaying the entire lifespan of a solar PV plant from cradle to grave. This demonstrates that to assess a project’s overall climate impact, it is crucial to consider raw material extraction, manufacturing, transport, as well as decommissioning and associated waste (Simões, Pinto et al. 2012). 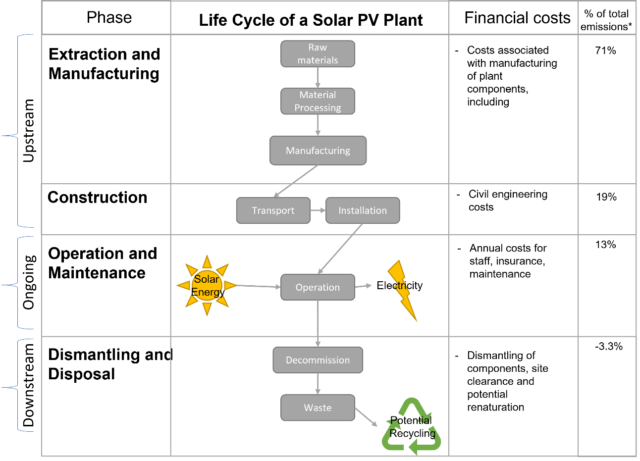 During operation, PV systems tend to have minimal operation and maintenance requirements, which reflects in very few emissions during this period (Hsu, O’Donoughue et al. 2012). Pooling estimates from various life cycle analyses, Nugent and Sovacool (2014) find that roughly only 13% of total life cycle greenhouse gas emissions occur during the operation stage. This is a striking difference compared to, for example, a coal plant, where less than 1% of greenhouse gas emissions are found to occur upstream, with more than 98% of emissions arising during the plant’s operation (National Renewable Energy Laboratory 2012).

Shown in Figure 3, the vast majority of greenhouse gas emissions of a solar PV system result indirectly during the upstream during the production and manufacturing of the system’s modules. For example, to produce the required high-purity silicon for crystalline silicon PV modules, a considerable amount of energy is necessary (Ludin et al., 2018). Wong, Royapoor et al. (2016) find that between 80% and 90% of the system’s total energy requirements stem from the electricity demand in the production phase. To concretely assess how much greenhouse gas emissions are released during the production and manufacturing phase, this requires knowledge of the carbon intensity of electricity of the electricity used. Production sites in countries with a more fossil-fuel intensive grid are likely to result in higher emissions during the production phase (Wong et al., 2016).

We can link the total energy requirements to the concept of the energy payback time, defined for a renewable energy system as the time require for a renewable energy system to produce the amount of energy that was used to build the system itself (Fthenakis & Kim, 2011). In the context of solar PV, this is the period required for the solar PV “to generate the same amount of energy used in its entire life cycle starting from raw materials extraction up to construction and decommissioning phase” (Ludin et al., 2018). For solar PV, estimates for the energy payback time range between two to five years  (Hsu, O’Donoughue et al. 2012).

Energy payback time for solar PV systems has been decreasing in the last two decades, with estimated embodied energy requirements dropping from 10 000 MJ/m2 in the 1990s roughly 3000 MJ/m2 in 2014 (Wong, Royapoor et al. 2016). This fall can be attributed once again to technological improvements in the production and manufacturing process. These include advancements in silicon material process efficiency, allowing a reduced PV wafer depth, which in turn decreases the quantity of silicon material required. Additionally, the reducing and recycling of silicon materials can reduce energy requirements.

As highlighted by Figure 3, in comparison to other energy generation technology and accounting for the emissions generated upstream, solar PV is still significantly more environmentally friendly than plants based on fossil fuel combustion. Tawalbeh, Al-Othman et al. (2021) found that a utility-scale Solar PV system’s carbon footprint is approximately 14 to 73 g CO2e/kWh, roughly 10 to 53 times lower than emissions reported from the burning of oil (742 g CO2e/kWh), and roughly 6 to 40 times lower than the emissions found to be occurring during the burning of natural gas (486 g CO2e/KWh) (National Renewable Energy Laboratory 2021). 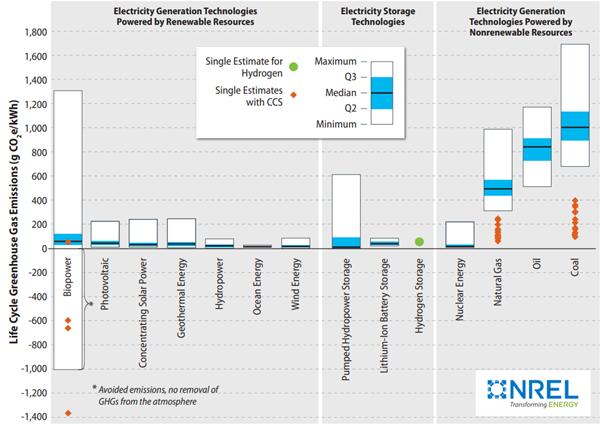 To decrease life cycle greenhouse gas emissions, and therefore to maximise the positive impact of solar PV, systems should have short energy payback time and long lifetime (National Renewable Energy Laboratory 2012). To provide clarity on emissions during production and to facilitate informed, sustainable decision making for the consumer, it is necessary that solar PV producers produce figures on energy intensity and the amount of greenhouse gas emitted during production.

Accounting for the intermittency of solar power: Lithium-ion storage

As mentioned before, solar energy is of intermittent nature. Thus, an energy system relying on solely solar power needs to integrate features to combat potential mismatches between energy supply and demand. One of these features is energy storage (Bent 2004). Therefore, when assessing the sustainability of solar PV, one must also account for the sustainability and cost of storage capacity. For short-term storage (i.e., 1-4 hours), Lithium-ion storage is the leading technology due to price, availability and energy density (Lazard 2020). Li-ion batteries require the extraction and mining of Lithium, and production of Lithium-Ion, which can be energy-intensive. To assess the environmental impact of Li-ion storage, one can once again apply life cycle analysis. Liang, Su et al. (2017) found a carbon footprint of 720.7kg CO2 eq for Li-ion batteries when produced in China. In line with our argumentation before, the authors suggest that publishing numbers on carbon emissions would help to facilitate low-carbon and sustainable purchase options (Liang, Su et al. 2017).  When assessing the life cycle of domestic-scale solar PV coupled with LI-ion batteries in Turkey , Üçtuğ and Azapagic (2018) found that such systems produce 4.7 – 8 times more energy than their production consumes, and hence have a positive net energy balance. This again indicates a positive environmental impact of solar PV, even if accounting for the environmental impact of battery production.

This report has shown that solar PV systems are not a zero carbon but a low carbon solution for electricity generation, which can compete with traditional power sources under the right circumstances. Overall, decrease in LCOE has been observed, as well as GHG emissions due to more cost-effective, production technology.

Carbon intensity could be further decreased by buying solar PV modules produced under lower energy requirements, and from producers, which can guarantee a less fossil fuel-intensive production. This might come at a higher cost though. Recycling of PV also is an important factor, so infrastructure for this must exist and be cost-competitive, i.e., just throwing the panels onto land fill must not be an option.

Finally, compared to most other renewable technologies, solar PV has the advantage that it can generate energy in both small- and large-scale situations, unlike say a wind turbine or biomass combustion, which might be unreasonable for a single house (Tawalbeh, Al-Othman et al. 2021).