Brighten up your day with solar PV

At OnGen, we examine the feasibility of a range of renewable energy technologies every day. We understand that not everyone may have this in-depth knowledge, so our latest blog post series will help anyone understand and learn about the most common renewable technologies. First up, solar!

Solar PV (photovoltaic) is a mature renewable technology for converting sunlight directly into electricity. By harnessing the sun’s energy, solar PV panels can generate electricity, which helps meet the energy demands for your organisation. This is achieved by creating direct current (DC) electricity and converting it into alternating current (AC) via an inverter. Contrary to popular belief, solar panels can still generate electricity on cloudy and cooler days. The efficiency of solar panels is increased in lower temperatures, making them suitable across the UK. 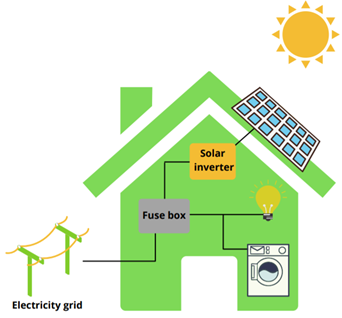 Using the sun’s energy, solar panels create a direct current (DC). The solar inverter then converts this into alternative current (AC), so it can be used by electrical appliances. The AC then flows into the fuse box. If electrical appliances require electricity, the AC will be provided directly to them. Any additional electricity will flow into the national grid so others can use it. Essentially the building has become a mini power station, hence the term ‘micro generation’.

Solar PV costs have fallen by 85% over the past decade, whilst their efficiency has increased. Most of the latest commercially available solar panels are between 18% to 22% efficient, making them financially feasible even without government subsidies.

There are two types of solar mounting options: roof mounted and ground mounted. As the name suggests, roof mounted solar PV systems attach to brackets on a roof. Such systems, particularly for domestic premises, have been very popular, accounting for over 96% of all solar PV installations. Roof mounted solar PV systems are easy to install and can last upwards of 40 years. They boomed with support from the Feed-in-Tariff (FiT), which generated income for both electricity generated and electricity exported to the grid. The FiT was replaced by the Smart Export Guarantee (SEG) in January 2020, which also requires electricity suppliers to offer payments to low-carbon generators but only for exporting surplus electricity to the grid. However, since the cost of solar PV has fallen so much, the payback and return on investment have surpassed what it was under the FiT scheme.

“The payback now is five years, so it’s actually better than it was at the peak of the Feed-in Tariff”

Ground mounted solar PV is an effective alternative to roof mounted if the latter is unsuitable for your site. However, it can be just as cost effective and easy to install as roof mounted. Ground mounted systems can be more efficient, as they can be strategically located, pitched and oriented at optimum angles for solar gain. This means that it is possible for you to generate more electricity than a roof system of around the same size. They also tend to cover larger areas compared to roof mounted systems due to not being confined to a roof area.

The benefits of using solar PV

Solar PV is a sensible investment for any business or campus with a suitable roof (or plot of land) and an intention to stay in the premises long-term. Owning the freehold of the premises or having a long lease over the property is also ideal and beneficial.

OnGen has collated seven key benefits of solar PV to give you more insight: 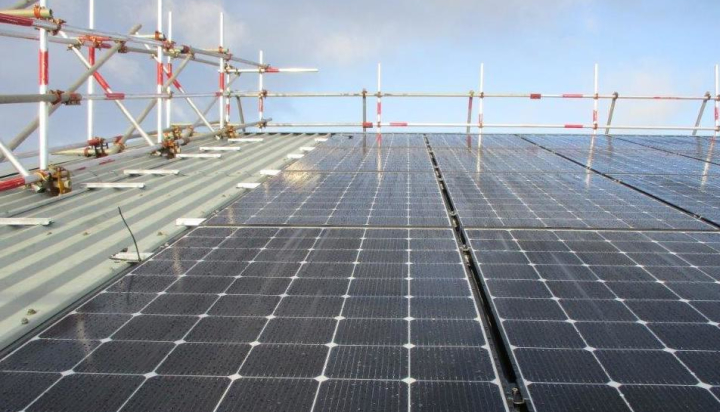 The Ministry of Justice has announced plans for installing solar PV at several of their properties within England and Wales. Prisons, including HM Prison Bure and HM Prison Whitemoor, will have solar panels deployed onsite. These projects were initially scoped using OnGen’s software, the OnGen Expert, which helped the Ministry of Justice understand the full potential of renewables at their sites. The renewable energy deployments will reduce carbon emissions by over 2,300 tonnes, helping the Ministry of Justice exceed its 2025 carbon reduction target. If you are interested in finding out the potential of onsite renewables for your sites, contact OnGen today.

If you are interested in finding out if your non-domestic building has a strong business case for installing solar PV, try the OnGen Expert. Our award-winning software allows for the financial and practical assessment of both rooftop and ground mounted solar PV, as well as various other onsite renewable technologies. Get in touch for a free software demo of the OnGen Expert or to enquire about our managed service.

Chris co-founded OnGen in 2014. He was a founding director and shareholder at Spark Energy Ltd (Sunday Times Fast Track 2014 – 23rd) over 10 years ago and since then, through his consultancy business, Clearer Energy Ltd he has advised a wide range of organisations on entry into the UK energy supply market including a number of large listed organisations, international energy supply companies, local authorities, renewable generators and housing associations.

Clearer Energy placed an emphasis on assisting community energy schemes to utilise local energy generation capacity from a range of technologies from wind to solar PV to reduce levels of fuel poverty.

Chris is a chartered accountant, who trained with KPMG Peat Marwick before moving into senior finance positions with a range of technology companies (mobile telephony and interactive TV) from 2000.

Chris’ passion outside of work is spending time with family and playing sport, particularly tennis.

Ibrahim is OnGen’s Business Development Manager primarily focussed on the broker and TPI markets, as well as energy suppliers.

Previously a high performing sales manager at British Gas, Ibrahim enjoys face to face engagement with OnGen customers in order to best demonstrate the software’s highlights. Ibrahim is often found at industry events where he can meet and engage with interested parties, using his considerable Linked In network to keep his connections updated on his busy schedule.

Since graduating with a degree in geography from the University of Edinburgh, he has undertaken placements in project management and data analysis, most recently at Regen, where he gained a comprehensive understanding of the renewable and distributed energy sector.

Gavin has worked in trading and energy markets for over 25 years. His roles have taken him across the globe with companies such as Gazprom and Itochu.

In his spare time he is an avid Rugby supporter and formerly coached the England Women U20’s Rugby Team.

At OnGen Gavin has been visiting customers nationwide, demonstrating the applicability and simplicity of the OnGen Expert to all sectors.

Jonny has worked across a range of energy generation technologies including wind, solar PV, biomass, hydro and anaerobic digestion and has been involved in the development of feasibility tools and studies to inform trade bodies, blue chips and project developers on the potential for installing technically and commercially viable renewable technologies.

He is also managing director of ITPEnergised and directs Energised Ventures Limited, which is an investment company taking renewable projects through the development phase. in his spare time Jonny ‘enjoys’ training for and competing in long distance triathlons, ideally in the mountains.

Andrew specialises in advising blue chip companies on the implementation of sustainable strategies into their business, understanding the impacts of climate change and highlighting the economic opportunities that can be delivered through resource and energy efficiency and support the development of innovative products with sustainability at their heart. Experience has included significant work in Russia, Africa, Asia and mainland Europe with a wide range of sectors, including oil gas, food, drink, transport, construction and infrastructure, energy generation, manufacturing and finance companies.

Over the past 5 years, Andrew has worked closely with the renewable energy industry providing feasibility assessment, development support and technical due diligence on a range of technologies and developments. Through this activity, it became apparent that a tool like OnGen Expert would provide a way to support and assist organisations who have an interest in low carbon energy but lack the technical know-how.

Melissa brings to OnGen 15 years’ experience in the energy industry, with a focus on trading, public affairs, marketing and external communications. Melissa has lead cross-industry lobbying campaigns on a number of issues engaging with Government, regulators and NGO’s. Recently Melissa has been focussed on the SME sector helping new companies engage with global audiences.

At OnGen she is passionate about connecting with businesses to help them realise the untapped potential of onsite generation, turning buildings into power station to achieve their sustainability goals.

When not at work Melissa spends most of her time with her young family, whilst renovating their old property and talking about doing more exercise.